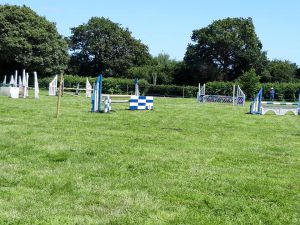 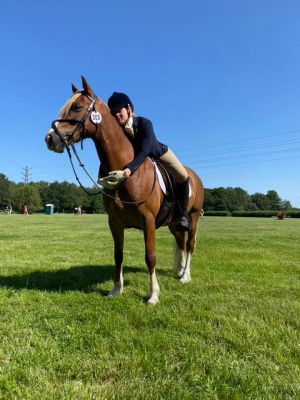 A lovely day at East Byshee which is a new venue to me and a very good one it is too. Although it is a schooling venue rather than for competitions the facilities were excellent and the owners had done a marvellous job of building dressage and show jumping arenas on flat ground with good grass cover.

Phoebe was our only member entered to qualify for the Nationals in September at Lincoln.

There wasn't anyone from Horsham for the Style jumping and only 2 in the 80cm and 2 in the 90cm. Phoebe had another win in the junior section at 80cms to qualify her for the Nationals!

Michelle Nash jumped a lovely round with an unlucky 4 faults in the 80cm which just put her out of the placings.

Clare Guy and Stacey Watts were in the 90cm class as individuals in the National qualifier. Both jumped good rounds with a couple of poles down with Stacey coming 6th and Clare just out of the rosettes.

Well done everyone and Good Luck at the Championships